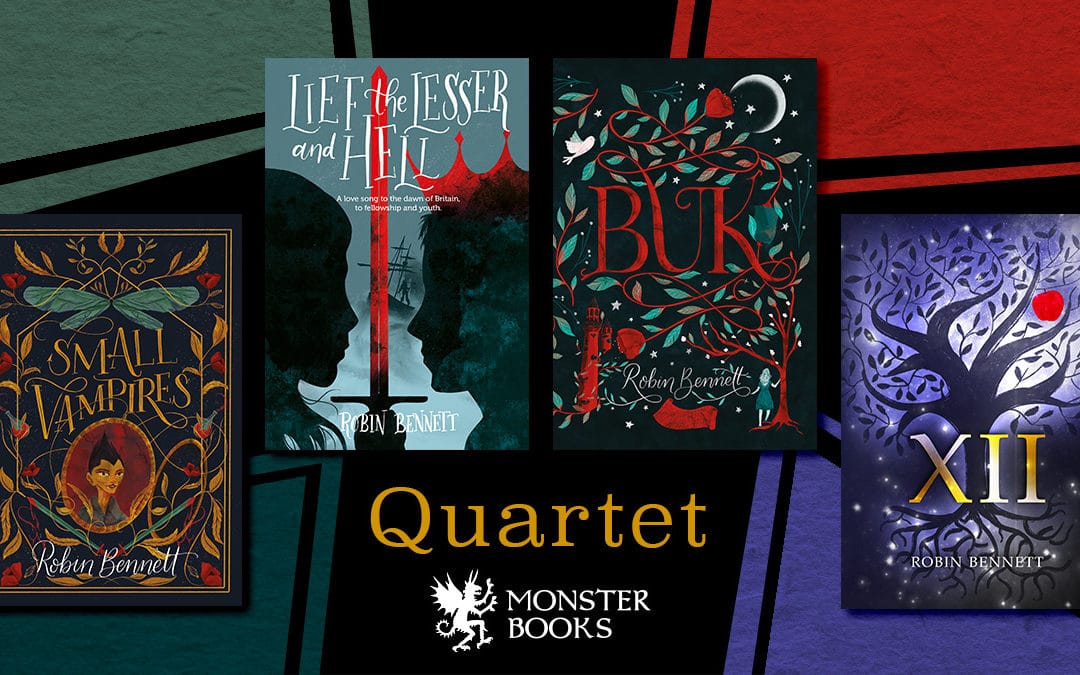 Eccentric and eclectic, Quartet from Monster books is a series of four rather different young adult titles we are publishing over the next 18 months.

Speaking for myself, it had a lot do with the fact our kids stopped reading the day they turned thirteen.

Before that, I remember feeling pretty confident that when all three of our children were tucked up in bed of an evening, they would be happily chomping through the list of fifty or so books the school gave us to read each year … whilst I was on my way downstairs. To watch telly.

It’s a bit different now, what with having to wrestle phones from hands and strategically place books I think they should read on bedside tables.

I wish they could lose themselves in a story the way they used to. But they rarely lose themselves in anything: the knack of focus has been superseded by the equally-useful, yet somehow-less-satisfying ability to absorb quick fire content and move on. I’m equally awed and alarmed by this constant, shark-like roving – but hoovering up information rather than splashy, shouty tourists.

Now, I concede that teens probably are reading fewer books than they were twenty years ago – but I don’t think it’s necessarily as bad as people believe. I’m pretty convinced that the YA literary explosion of the 90s was ignited by adults buying, as much as by any other factors. It certainly skewed the figures.

That lack of specificity/understanding is part of the problem – one which, as a publisher and writer, I can do my bit to help with. We in publishing need to have a more focused approach to YA, which is what we hope to do with Quartet. The way I see it, there are five main things to drill down on.

We shouldn’t just publish essentially adult books (often from big name authors) that have been ratcheted down in language and complexity. We should publish books written for the YA market.

We should keep in mind that teens don’t need a lecture from us by way of a story about growing up, and not all YA has to tackle ‘issues’ – it can just be good fun or honest escapism.

That said, some YA reads like it was written with a juicy film rights deal in mind. That’s bad, too: most truly good books have to be heavily adapted before they can work in film and visa versa.

Teens need to see themselves reflected in books and this is happening. Hopefully progress here will build momentum we need.

We don’t stand a chance of ushering in another generation of teen and YA readers unless we are prepared to take a few chances and try different tacks: shorter books, more illustration, tinkering with formats, swashbuckle and market differently. A good example of unusual formats working is ‘a good girl’s guide to murder’, bestselling YA murder mystery largely written up like a police report, fantastically well done

This last one is key, and it is what Quartet is all about: entertainment is still the main thing but I’m doing things a bit differently – breaching a few boundaries and breaking a few rules.

Bible chronicles told uniquely through the eyes of adolescents.

A prose-poetry story of the dawn of Britain, again through the story of young adults – this time washed ashore when the English Channel was carved out by a tsunami caused by a big part of Norway falling off around 10,000 years ago. Beautifully water-coloured by the incredibly talented Sara Hornby.

Diminutive Nosferatu dragged into British folklore by way of a Grail Quest.

A girl coming to terms with growing up (basically my take on Alice in Wonderland).